FOREWORD:  Not only do we have a little bit of useful history about L’Illustration Nouvelle in these two articles, but Mr. Joseph Bourdon, who wrote the history, was interviewed in 1983 by the National Unity Party of Canada for a Biographical Sketch on Adrien Arcand.  Adrien Arcand Books produced that sketch in English on September 25, 2018 as A Short Study of the Life of Adrien Arcand.

Even astrologer missed death of tabloid

QUEBEC (CP) — Montréal-Matin is dead and if Joseph Bourdon had really been an astrologer, maybe he could have forecast the end of the French-language morning news tabloid.

“Even though I knew nothing about astrology, I wrote the daily horoscope for about 30 years,” wrote Bourdon in his history of the newspaper published just this fall.1

Bourdon, who joined the paper a week after its launching July 4, 1930, and who retired at the end of 1977 to finish his history, did not realize that the end of his career would practically coincide with the end of the publication to which he devoted his entire working life.

“May Montréal-Matin, even through the stormiest weather, continue on its way to new achievements for a long time yet,” he writes in the final paragraph of his 283-page chronicle.

The axe fell suddenly on Wednesday when Fernand Roy, executive vice-president of both Montréal-Matin and the large afternoon daily, La Presse, announced that a seven-month strike in 1977-78 had “killed” the paper.  Faced with an operating deficit of $3 million for the year, the owners had no choice but to make Wednesday’s issue the last.

Now that the deed is done, the reader of Bourdon’s history would be sorely tempted to conclude that the paper’s fate was in the cards practically from the beginning.

Born as a result of a family quarrel over ownership of La Presse, Montréal-Matin‘s doom seems in retrospect, especially for those who pay attention to omens, to have been a foregone conclusion from Aug. 10, 1973, when it was announced that La Presse Ltée had bought the paper.

Both newspapers were owned by Gesca Ltd., which is controlled by financier Paul Desmarais, head of the giant Power Corp.2

Montréal-Matin was launched during the Depression by a group of Conservatives including Camilien Houde, then leader of the Quebec Conservative party and mayor of Montreal, and largely financed by Eugène Berthiaume, son of the founder of La Presse, Treffle Berthiaume.

From the time of his father’s death in 1915 to his own in August 1946, Eugène engaged in a bitter legal and political battle with his brother-in-law, Pamphile Du Tremblay, over control of La Presse which fell into the latter’s hands through provincial legislation in 1922.

Bourdon cannot explain what brought Eugène to launch L’Illustration, the name under which Montréal-Matin was known at the start, when he was co-owner of La Presse.

Provincially and federally, the paper supported the Conservative cause in opposition to its competitor, Le Canada, a morning paper run by Liberals.

After Maurice Duplessis had taken over the leadership of the Quebec Conservative party from Houde and transformed it into the Union Nationale, L’Illustration became L’Illustration Nouvelle and a staunch supporter of the new party elected to power in 1936.

Operated on a shoe string, moving from one building to another and even cut back to a weekly for seven months in 1931-32, the paper’s fortunes seemed to rise and fall to the rhythm of Conservative and Union Nationale electoral successes and defeats.

Upon Duplessis’s defeat in 1939 and the outbreak of war in Europe, Eugène Berthiaume, living the life of a well-heeled expatriate, wrote from Paris suggesting suspending publication in 1940.

Joseph Bourdon contributed to the Biographical Sketch of Adrien Arcand (1983)

But the paper plodded on through pay cuts and by the skin of its teeth.  The name Montréal-Matin first appeared on the masthead in 1941.  Houde and Adrien Arcand, the editor in chief who founded a fascist political party, were among those interned during the second World War.

Duplessis returned to power in 1944, the first year that Montréal-Matin showed a profit, and in June 1947, the tie binding party and paper became official with the Union Nationale’s purchase of Montréal-Matin for $250,000.

“That newspaper tried everything to survive:  They adopted the tabloid format, moved from St. James Street to De Gaspé Street, but the changes did not bring happy results,” Bourdon wrote.  The end came after 50 years as it was to come 25 years later for Montreal-Matin.

2.  Power Corporation, in 1967, became the headquarters of a “secret committee” of communists in the federal government of Soviet agent Lester Bowles Pearson, who ordered the founding of the Parti Québécois to dismantle Canada into city-states under a planned world government.  You heard it here first.  Subscribe if you want more.

There’s a great French video in the middle of my second story for this post.  At 8 minutes and 6 seconds into the clip, Madam Poulin of Radio-Canada/CBC and Monsieur Bourdon talk about Adrien Arcand.

I managed to copy that segment, you can download it in French.  But, it doesn’t have English subtitles.  I just found the clip today as I was ready to put this post up with just the Sherbrooke Record item.  I have quickly translated the Radio-Canada article; but I will have to add subtitles to the video another day, that’s a very big job.

Basically, you can enjoy the clip, knowing that the conversation goes like this:

Madeleine Poulin says that in the history of the newspaper (Montréal-Matin, originally called L’Illustration and then L’Illustration Nouvelle), we find a pre-war figure, Adrien Arcand, leader of a fascist party, National Unity. 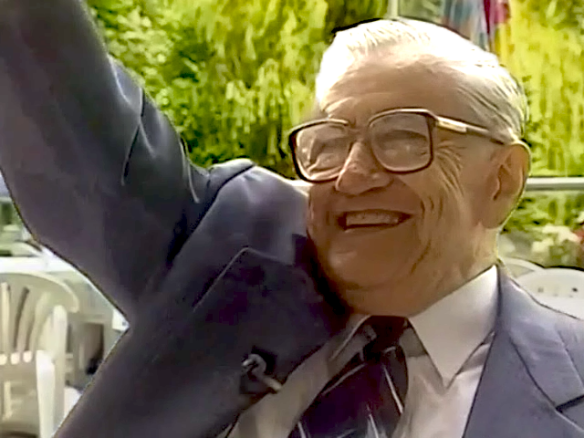 Joseph Bourdon says that Adrien Arcand wrote editorials and a column, the name of which he can’t quite recall, but “never, never, you know, did we feel a fascist influence on his part, either towards us, the journalists, or in the newspaper: no.  He wrote the best articles in favor of Duplessis.  You know.  There was no question of … the fascist party.  But, it happened on occasion, he held public meetings, and he arrived (at work) in his party shirt” (Bourdon thought it was a black shirt; but the uniforms were blue).  And even his wife wore her uniform, says Bourdon.  “She came to see him from time to time, and she wore a uniform.  And around 5:00 PM, or 5:30, we always saw Major Scott arrive, who was the bodyguard of Adrien Arcand.  Oh, he was a Colossus of a man!” says Bourdon, beaming with pleasure.  “And he wore a uniform,” says Bourdon, who imitates the salute of Major Scott and smiles.

40 years ago, the Montréal-Matin daily disappeared.

Madeleine Poulin:  “In the history of the newspaper, we find a pre-war figure, Adrien Arcand, leader of a fascist party, National Unity.”