GET THE FLASH FLIPBOOK 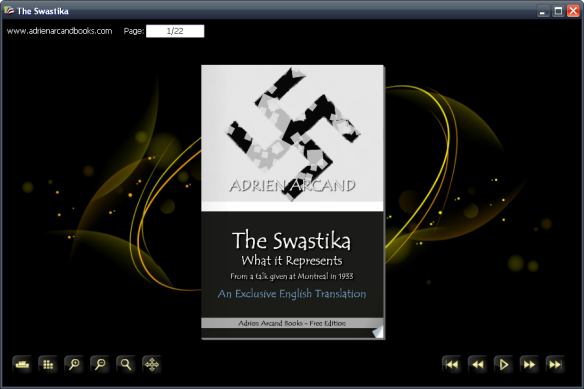 “The Swastika, What it Represents” is the closing segment to Adrien Arcand’s 1933 address in French entitled “Fascisme ou Socialisme ?” (“Fascism or Socialism?”) given at Montreal and published by Le Patriote.  It is found on pages 65, 66 and 67 of the French talk.

For Adrien Arcand, who stated:

“The Christ had said and proven that these descendants of Abraham were to reign eternally over all, and above all was He, the only Son of the Father, not created but engendered by the Father, ever after known by the name of YHVH, Jehovah, Sabbaoth, etc.”

NOUN: ANACHRONISM U’NA-KRU,NI-ZUM
1.  Something located at a time when it could not have existed or occurred
2.  An artifact that belongs to another time

It would be anachronistic to interpret the intentions of Adrien Arcand using post-war interpretations of the swastika attributed to Hitler by various writers.  Adrien Arcand adopted the swastika in 1933, well before WWII (1939-1945), and he clearly explained what it meant for him.  It was a symbol to unite the family of white western peoples in mutual understanding, to prevent another world war among them.  It was the symbol of a common racial identity transcending international borders for the purpose of achieving “real world peace”.

THE SWASTIKA, WHAT IT REPRESENTS

The Swastika, What it Represents

The swastika from the frontispiece of Adrien Arcand’s Fascisme ou Socialisme? (1933)

If you enjoyed this, you may like the video to keep with your eBook; the video has music!

Click the image to view the video at Bitchute.