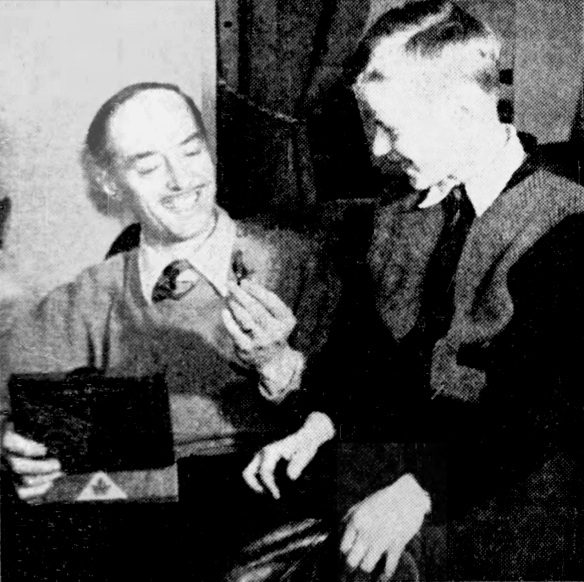 AMONG HIS SOUVENIRS:  Adrien Arcand, anti-semitic proponent of totalitarianism, is shown above at his home at Lanoraie, Que., showing some of his souvenirs from his stay in internment camp to his son Pierre.  During his five-year sojourn Arcand carved a number of brooches, buttons, boxes and similar objects, each bearing the emblem of the National Unity Party—a flaming torch.

‘Jews Trying to Soften Us For Russian Drive’—Arcand

(Following is the last of three articles by Kenneth G. Wright, Gazette staff writer, on Adrien Arcand, Canadian Fascist leader who was interned for five years.)

Canada faces a double danger from Russia today, an attack from the north and steady disintegration of the country from within by “Jewish Bolshevik spies,” according to Adrien Arcand, pre-war leader of the Canadian Fascists.  Arcand, interned for five years as a menace to his nation’s war effort, in an interview at his home at Lanoraie, Que., last week, declared his anti-Jewish organization is now stronger than before. 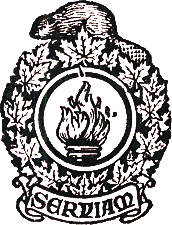 Official emblem of the National Unity Party of Canada

“Canada has become the new Belgium,” he said.  “We are geographically and economically an American country, and Russia some day must strike through Canada at the United States  The greatest danger, however, is from within, for both nations.  You see every day instances of how the Jews are trying to soften us up, ready for the big blow.  Russia is not powerful enough to attack today, but she hopes to be in time, and meanwhile the Jews are preparing the way.

“Did you see the outcome of the recent war between Fascism and Democracy?” he was asked.

“It wasn’t a war between Fascism and Democracy, it was s war, instigated as the First Great War was, by the Jews against the rest of the world.  In smashing the fighting power of Russia, the anti-Jews have won the first round.  I am doing my part, with my fellow believers in Canada and other parts of the world to help win the second, which is inevitably coming.”

His blueshirt legions, prominent at Arcand’s meetings in Montreal around 1938, were merely a “protective organization” against the Communists, the National Unity Party leader said.

‘Ahead of Our Time’

“I put my men into uniform and insisted they keep neat and clean and look smart merely because the Communists who tried to break up our meetings were the opposite — a dirty unshaven Jewish rabble, only out for trouble.

“We were trying at those meetings to tell the people of Canada what was in store for them, we tried to warn them of the Jewish-Communist menace.  We were 10 years ahead of our time in that work.

“Our real organization, however, was one of thinkers and planners.  That organization today is stronger than it ever was.”

Denying that his blueshirts ever had violent aims, Arcand reiterated that his present goal is to achieve his ends through peaceful methods.

“I am against harming any man.  I believe in faith, hope and charity.  My present aim in life is to enjoy my family and to watch events until the time comes.”  A Roman Catholic in religion, Arcand and his family have a pew in the Lanoraie parish church.  His philosophy, however, does not prevent him from reading with delight of British plans to take a firm hand with the terrorists in Palestine.  This he sees as action “for the cause.”

Much of the Arcand story remains to be told — much that only Arcand knows.  He has friends, some of them undoubtedly sympathetic, in high places in this province and in the rest of Canada.  How far those friends, and the people they can influence, will march with Arcand, “when the time comes,” he probably doesn’t know himself.

For the present, however, he is keeping his secrets.  “Memoirs?  A book?”

Download the original article, “‘Jews Trying to Soften Us For Russian Drive’—Arcand“.

* The image of the NUPC emblem was added by yours truly.

3 thoughts on “‘Jews Trying to Soften Us For Russian Drive’—Arcand (Montreal Gazette, 25 February 1947)”